Past attempts to impose artificial “reasonable pricing” requirements on developers of government supported innovation did not result in cheaper drugs. A study on compulsory licensing found resulting drug prices are often higher. You have to give Rep. Lloyd Doggett (D-TX) credit for being consistent. He’s one of the most determined advocates for misapplying the Bayh-Dole Act so the government can license competitors when he feels that drugs arising from federally-supported R&D aren’t “reasonably priced.” Luckily, both Republican and Democratic Administrations rejected that wrongheaded idea. But rather than being discouraged, he’s taken that philosophy to a new level.

He recently introduced the Medicare Negotiation and Competitive Licensing Act of 2018. Lest the title confuse you, by “competitive licensing” Rep. Doggett means compulsory licensing anytime a company declines to sell their drug for whatever price the Secretary of Health and Human Services  cares to offer during “Medicare negotiations” where the government holds all the cards.

Negotiating under the Doggett bill is like dealing with the Godfather. The company is given “an offer it can’t refuse.” If they decline instead of finding a severed horse’s head in their bed, the government confiscates the invention (along with any clinical trial data and regulatory exclusivities needed to produce the drug) for competitors to use.  The patent owner gets “reasonable compensation” — as determined by the government. If they don’t like the offer they can sue.

And unlike compulsory licensing under international agreements, there is no need for the government to allege that the drug isn’t readily available or that there’s an unmet medical emergency.  All that ‘s required is for the bureaucracy to dislike the price of a drug. This is done under the guise of promoting the public interest.

While the bill won’t go anywhere this year, almost half of the Democrats in the U.S. House of Representatives are co-sponsors. If this is a preview of coming attractions should control of the House change after the election, American innovation is in serious trouble.

Since a picture is worth a thousand words, rather than offering detailed explanations why the Doggett approach is a more likely to cripple our life science industry than to reduce drug prices, let’s look at some charts.

The first from Scientific American is titled The cost of developing a new drug has skyrocketed since the 1970s. 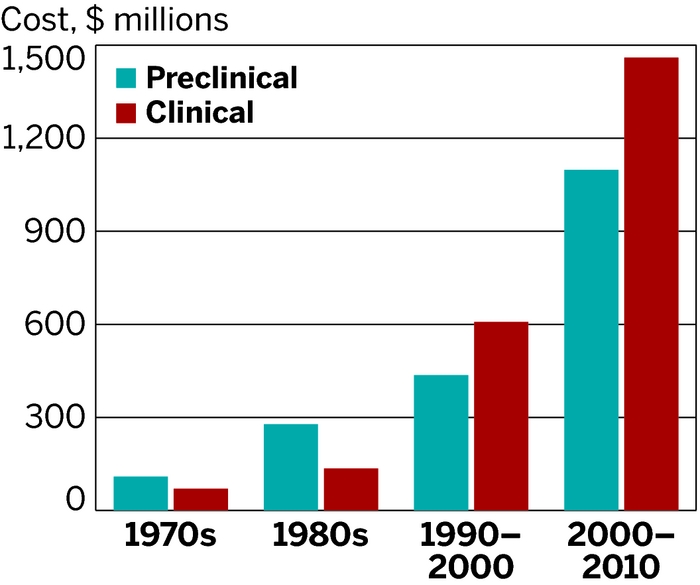 One reason is the odds against developing a new drug are staggering.

What the critics overlook is that a drug which makes it through the pipeline must pay the costs of its 9,999 brothers and sisters which died in the process. To make this even worse, only 20% of  successfully developed drugs turn a profit. If a financial advisor talked you into investing your retirement savings in a plan with these odds of success, they’d be in jail.

The U.S. is one of the few countries willing to assume the risks of developing new drugs and is far and away the largest source of all of the world’s therapeutics. And our dominance is increasing.

When other countries impose artificial price controls on drugs, the burden primarily falls on U.S. companies.  That’s a reason why prices are higher here— we’re subsidizing drug development for the rest of the world.

The U.S. is also unique as more than half of our new drugs come from small companies. Strong patent protection is critical for start up’s to raise the tremendous amounts of risk capital required for drug development and to protect them against larger competitors.These patents protect a product which has taken more than a decade to develop while stakeholders anxiously await some return on their investment.

Losing their patents and know-how through a compulsory license would be the death knell for small companies which are often the source of breakthrough, high risk drugs desperately needed by suffering patients.  Do the critics ever wonder who’s going to create the drugs of the future if they make the process even more daunting?

A key advantage the U.S. enjoys over our competitors is the commercialization of federally funded inventions. Private/public sector partnerships are important parts of our innovation pipeline. However, federally funded inventions are more like ideas than products. A study in Nature estimates that companies spend $100 in development for every $1 the government spent in research leading to medical inventions. Even then the odds remain stacked against successful commercialization. These companies are not getting a free ride.

Yet that’s exactly what promoters of the Doggett bill claim:

As Americans, we pay the highest drug prices in the world. Indeed, we pay twice. Our tax dollars fund the research that results in those blockbuster medications from which Big Pharma profits. Every single one.

That is no exaggeration. A recent study, published in the Proceedings of the National Academy of Sciences, has found that the development of every single one of the 210 new drugs approved by the federal government from 2010 through 2016 involved research funded by the National Institutes of Health. Our tax dollars fund NIH’s annual research budget, which amounts to over $37 billion in 2018.

Yet this tax-supported research does not provide us with affordable drugs.

Past attempts to impose artificial “reasonable pricing” requirements on developers of government supported inventions did not result in cheaper drugs.  Rather, companies simply walked away from partnerships as indicated by the chart below on “cooperative R&D agreements” (CRADAS) with the National Institutes of Health.  CRADAS began in the late 1980’s and rapidly increased until the reasonable pricing requirement hit. The immediate impact was the dip seen below.  NIH revoked the program in 1995 since its only impact was undermining scientific cooperation without generating any public benefits. CRADAs then exploded in 1996, and are once again on the rise. Perhaps the ultimate irony of the Doggett approach is that compulsory licensing hasn’t been effective in lowering drug costs in developing countries.  A study titled Compulsory Licensing Often Did Not Produce Lower Prices For Antiretrovirals Compared to International Procurement found that resulting drug prices were often higher than they would have been under a more cooperative approach.  It concludes:

That fact makes it all the more important for governments to make medicine procurement choices through transparent, collaborative processes in which governments and multilateral and charitable actors work in a collective or pooled fashion with medicine suppliers. As the global disease burden shifts toward illnesses that can be treated with novel medicines, this sort of approach is likely to come closest to the shared goal of equitable access.

If compulsory licensing doesn’t work in the developing world, why would anyone believe it would be more effective here?

There would be one beneficiary of the Doggett legislation, but it won’t be patients.  While the bill would  devastate our life science industry it would be a boon to China, which is desperately trying to eclipse our innovation lead.  While our patent system unravels, theirs is getting stronger, attracting foreign companies and promoting internal innovation. Now some of our leaders are flirting with compulsory licensing.  Life science companies could come to view communist China as a better place to do business than the United States.

Rep. Doggett and his colleagues would do well to rethink their approach.  Having to rely on Chinese companies for our drugs wouldn’t  be very pleasant. They’ve had a belly full of democratic socialism and would view squeals from our politicians over prices they’d charge with contempt.

Compulsory licensing only makes the problems with our health care system much, much worse. For the sake of those suffering from disease, let’s pray we don’t ever follow leaders herding us over this cliff.